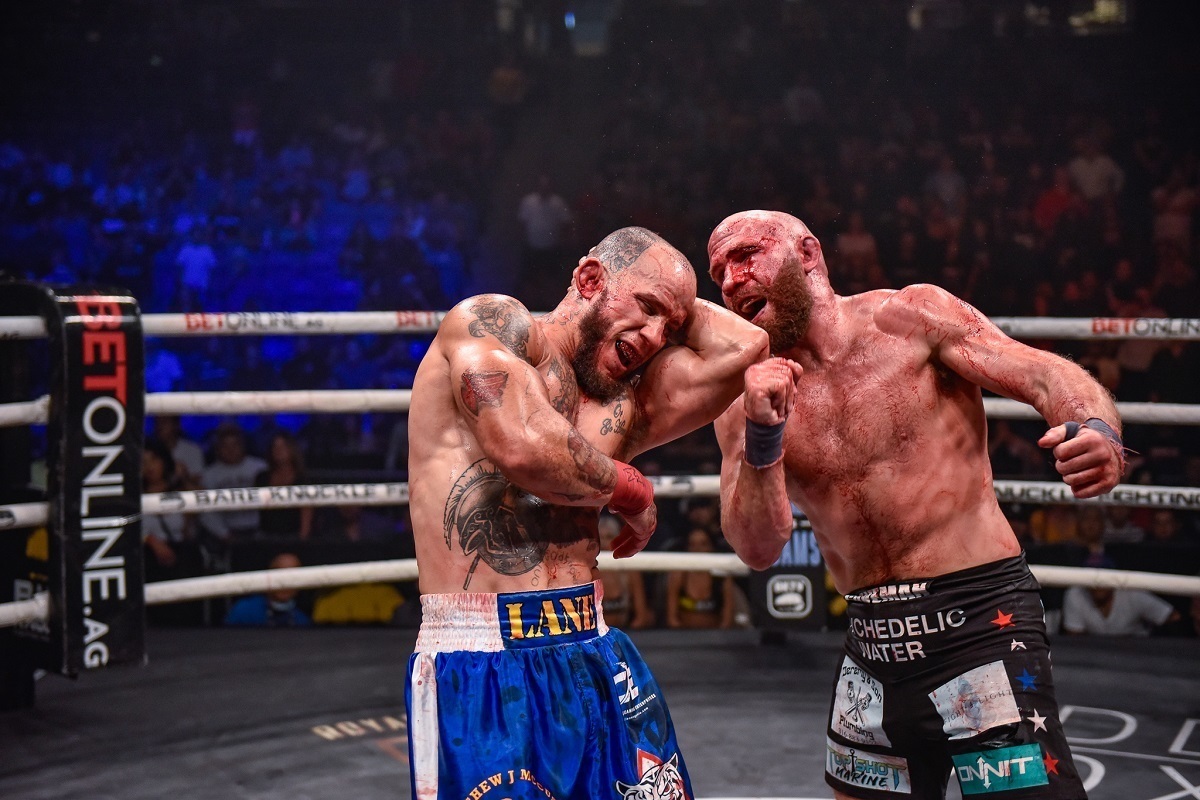 In the main event of the evening, hometown favorite Dave ‘The Cavemen’ Rickels, (2-0), won a unanimous decision over Julian ‘Let Me Bang’ Lane, (3-4, 1 KO), of Mansfield, OH in their super welterweight clash. With bad blood brewing in the weeks leading up to the fight, the two rivals aggressively attacked from the opening bell which had the huge, raucous crowd on their feet from the start.

As the fight progressed, Rickels, displaying a higher punch volume, kept up a solid attack against the valiant Lane winning by scores of 50-45 and 49-46, twice. Both fighters were cheered by the Wichita crowd at the final bell in recognition of one of the most exciting BKFC fights of the year.

Fighting in the bantamweight division, hometown BKFC debuting Marciano Hernandez, (1-0, 1 KO), scored a first-round stoppage of Andy ‘The Bluegrass Kid’ Locker, (0-1), of Lexington, KY. A right hook / left hook combination brought a half to the action at the 1:46 mark of the opening stanza.

In the middleweight division, BKFC debuting Jake ‘The Librarian’ Lindsey, (1-0, 1 KO), of Manhattan, KS was victorious via TKO when his fight against Eric Thompson, (0-2), of Slidell, LA was stopped by the referee.

Fighting in the lightweight division, BKFC debuting Charles ‘Wild Man’ Bridges, (1-0, 1KO), of Oklahoma, knocked out LJ Hermreck, (0-1), of Kansas, in the first round with a one-punch straight left hand. Time of the stoppage was 1:23.

Battling in the bantamweight division, Mark ‘The Shark’ Irwin, (1-0, 1 KO), of Irvine, CA knocked out Drake Heitfield, (0-1), of Topeka, KS. A battering right cross brought a halt to the action at the 1:30 mark of the second round.

In the featherweight division, Shawn Moffet, (1-0), stopped Nick Villar, (0-1), in the first round (0:58), following a barrage of punches. Both Kansas natives were making their BKFC debuts.

Opening the action in the super lightweight weight class, Johnny ‘Cash’ Pantoja, (1-0, 1 KO),  of Kansas stopped Arizona’s Luke Parsons, (0-2), in the second round from a double right hook to the body. Time of the stoppage was 0:24.