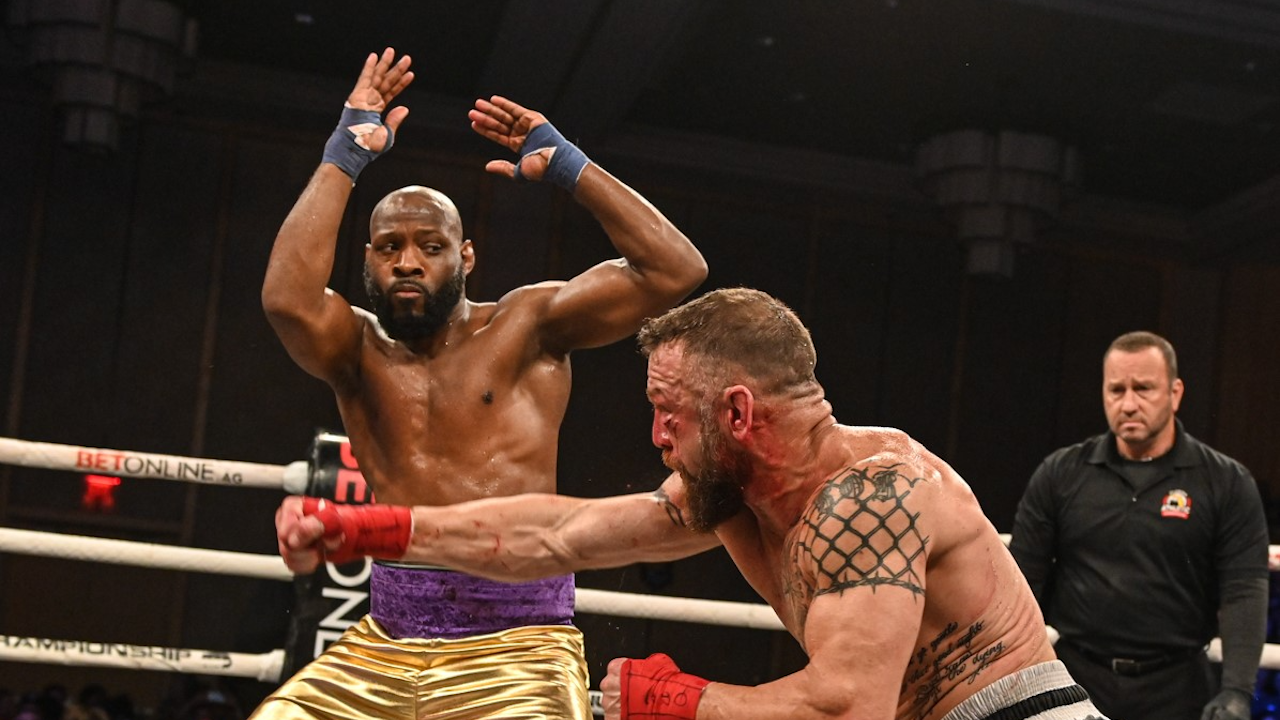 Martin Brown: Fighting You to the End

Martin Brown, undefeated BKFC lightweight contender who faces champion Luis Palomino at Knucklemania 2, goes by the nickname “Smash.” It conjures images of destruction, perhaps some rubble and ruin. Then Brown speaks, and it’s as if he’s more liable to smash you with gentle wisdom than hurt you in a bare knuckle bout.

“I had a bunch of martial artists in my family,” Brown says, somewhat quietly. “I have uncles who were into karate and American kickboxing. My family wasn’t big on it, though. They’re peaceful people. I always had to sneak off to train.” 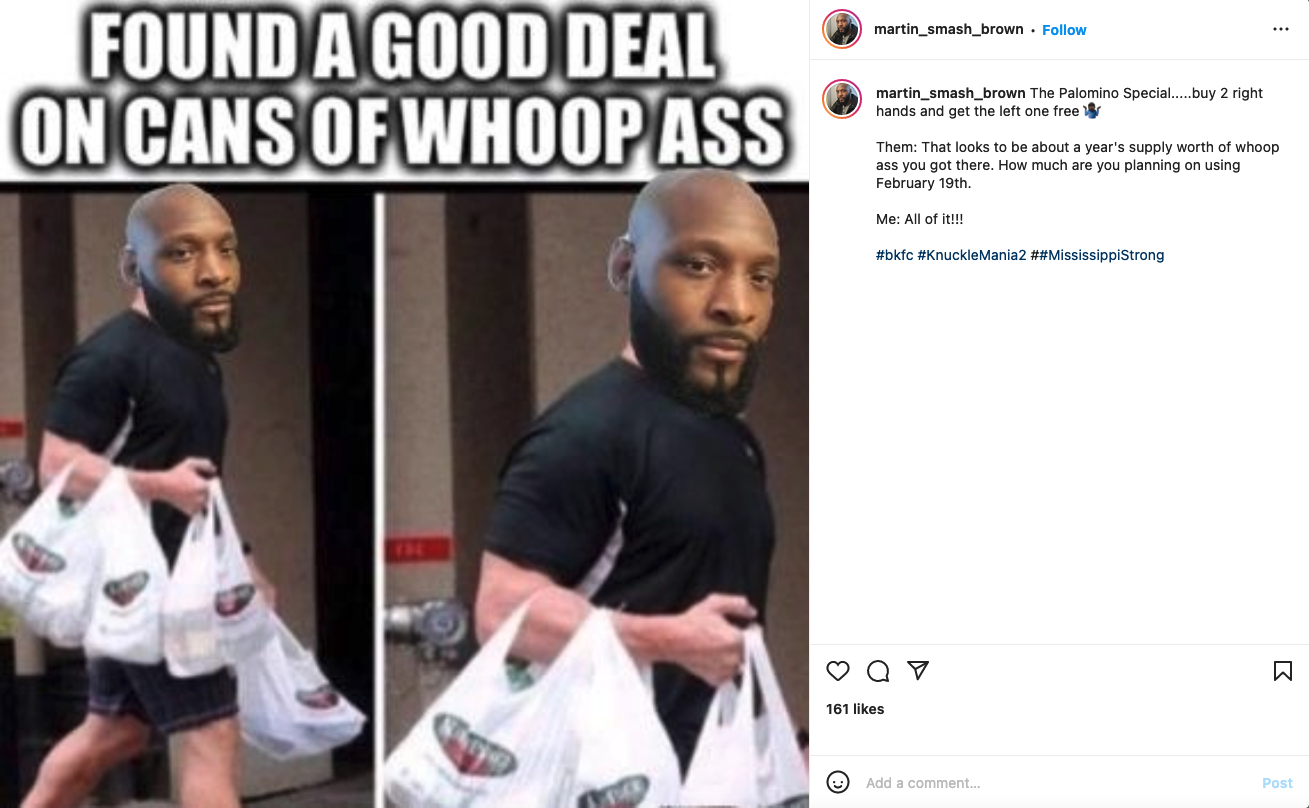 Vicksburg, Mississippi, where Brown is from, is in the western portion of the state. It’s a smaller city with a population of about 20,000, right on the Mississippi River. Combat sports fans likely aren’t familiar with it whatsoever.

“We had people in the neighborhood boxing, wrapping towels around our hands and watching videos, trying to study tapes,” Brown remarks about his humble combat sports beginnings. “None of us knew what we were doing. But the first chance I had, when I got a job, I started looking for a gym.”

Brown wagers bare knuckle, and the local Mississippi fighters already participating in it, will change a few things. It’s a state with many people who work with their hands, Brown is quick to remind, and fighters can come from literally anywhere.

“You saw me blow my knee [against Zach Zane] and I got up and finished the fight. My last opponent, Bobby Taylor, he’s also from Mississippi. He got dropped three times and he just kept getting up. And he didn’t just get up, he kept trying to win, swinging for the fences the whole fight. Kaleb Harris just had two wars and he never laid down. Kaleb is from Mississippi. I think we’ve shown the reputation of being durable and outright fighting you to [the end].” 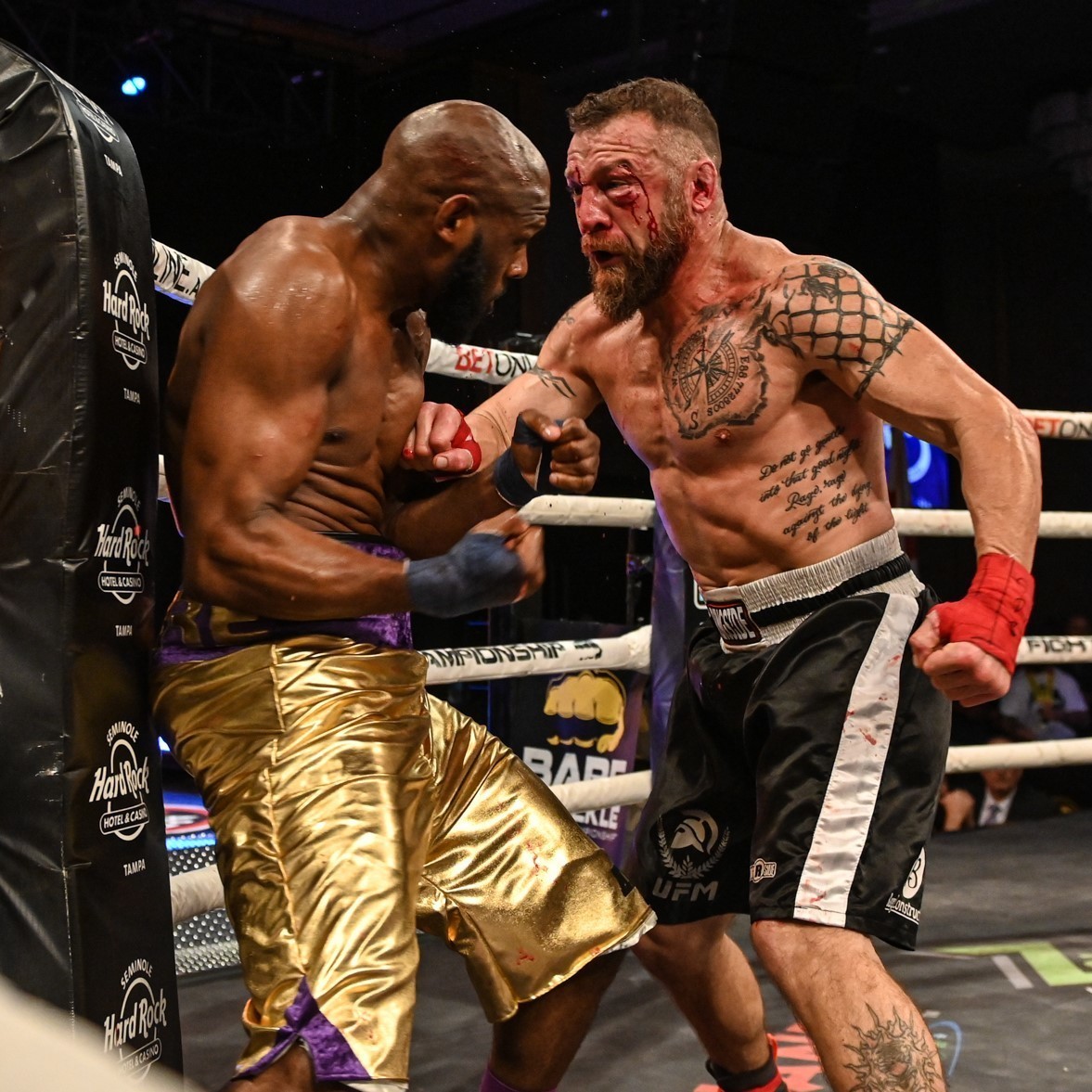 The calmness with which Brown speaks is actually infectious. It takes a moment to digest his words. By the time you realize there’s mayhem on his mind behind the sawtooth grin, it’s too late. You’ve underestimated him and, if you’re a fighter, you were one of his three bare knuckle victims.

Nearly any bare knuckle fighter will confirm that participating in this sport, much less hearing the final bell while still conscious, requires abnormal bravery. Going undefeated over a series of fights is rare. The ability to grow and adjust is incredibly valuable. That’s where Brown’s journey is familiar, and yet still unique.

“I ain’t stupid,” Brown says with a smile. “I noticed when I traveled around to other places the level [of competition] was a little higher. I’d be really good locally, but when I left the state, I was a big fish in a small pond.”

It was at that point that Brown had a decision to make: aggressively pursue growth away from home, or stick around and be good, but never great. Brown says he needed to know how far he could go, even if simply living life turned into its own fight. 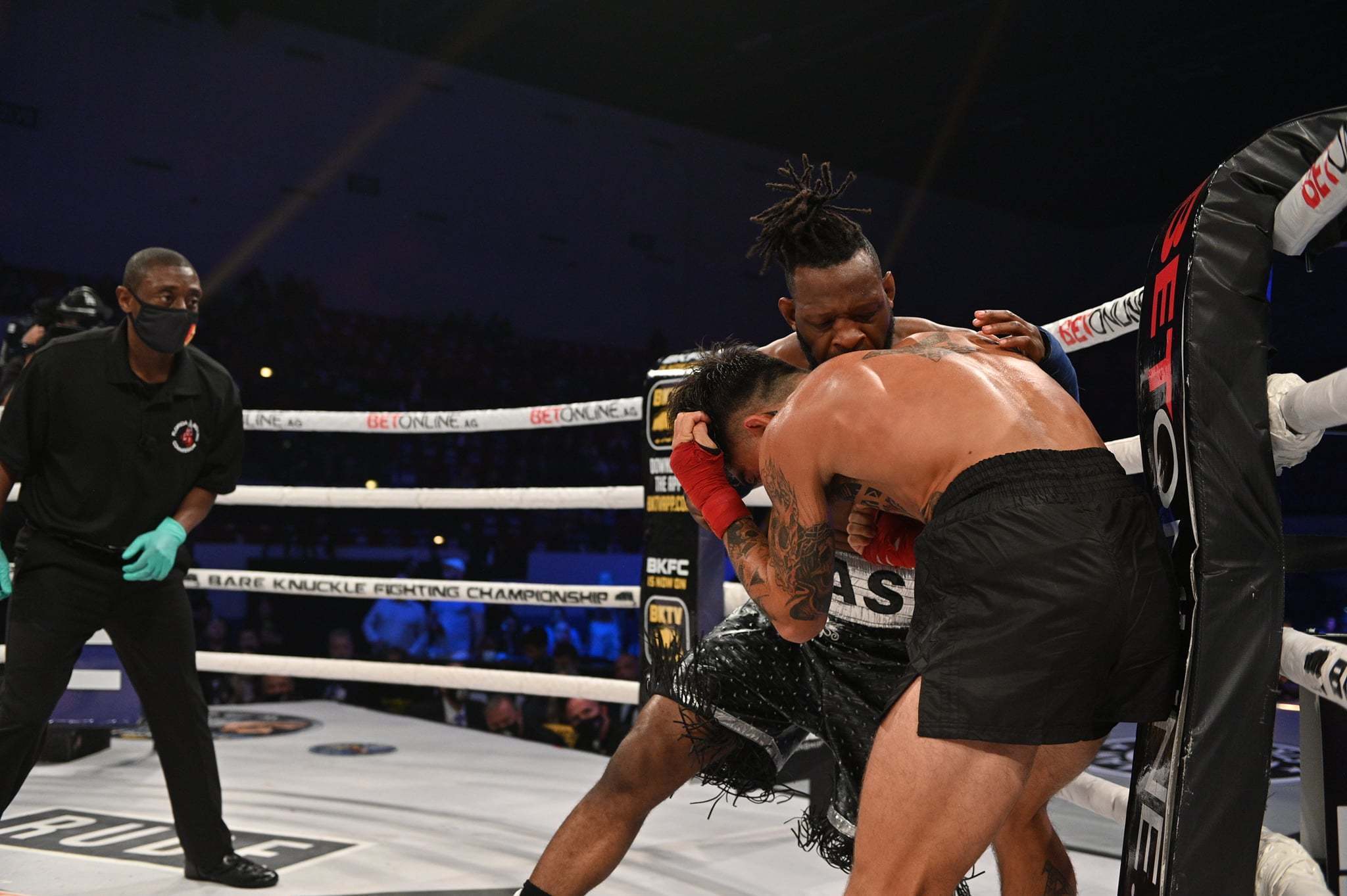 Brown’s parents, born in the 1950s and having lived through and among the civil rights movement, earned master’s degrees and expected their son to seek financial stability and success in academics. His family knew music too, and Brown learned how to play piano and guitar before fighting broke his hands and playing instruments wasn’t prioritized. Brown wanted another way. He wanted his way.

“Once I realized that I’d only be a champion in Mississippi, and every time I’d travel I’d get beaten up even by amateurs, I took a fight,” Brown continued. “With $1700 in my pocket, I went to the junkyard. I grabbed whatever I could get to help me make the trip from Vicksburg, Mississippi to Tampa.

[My coach] helped me get housing, but it was temporary and I didn’t wanna miss training. So I’d sleep in the Wal-Mart parking lot, run in and bathe in the sink in the gym. Sometimes I slept in front of the gym and my trainer would ask, ‘You’re here already?’ and I’d say, ‘Yeah, I just got here early.’ But they knew.”

The more of his story Brown tells, the more understandable his path becomes. Like a blade whetted on a stone, life’s constant grind has sharpened Martin Brown. He doesn’t think much of champion Luis Palomino, but not in a way that conveys insult. Brown’s just been around too long to let the gravity of his upcoming moment rattle him. 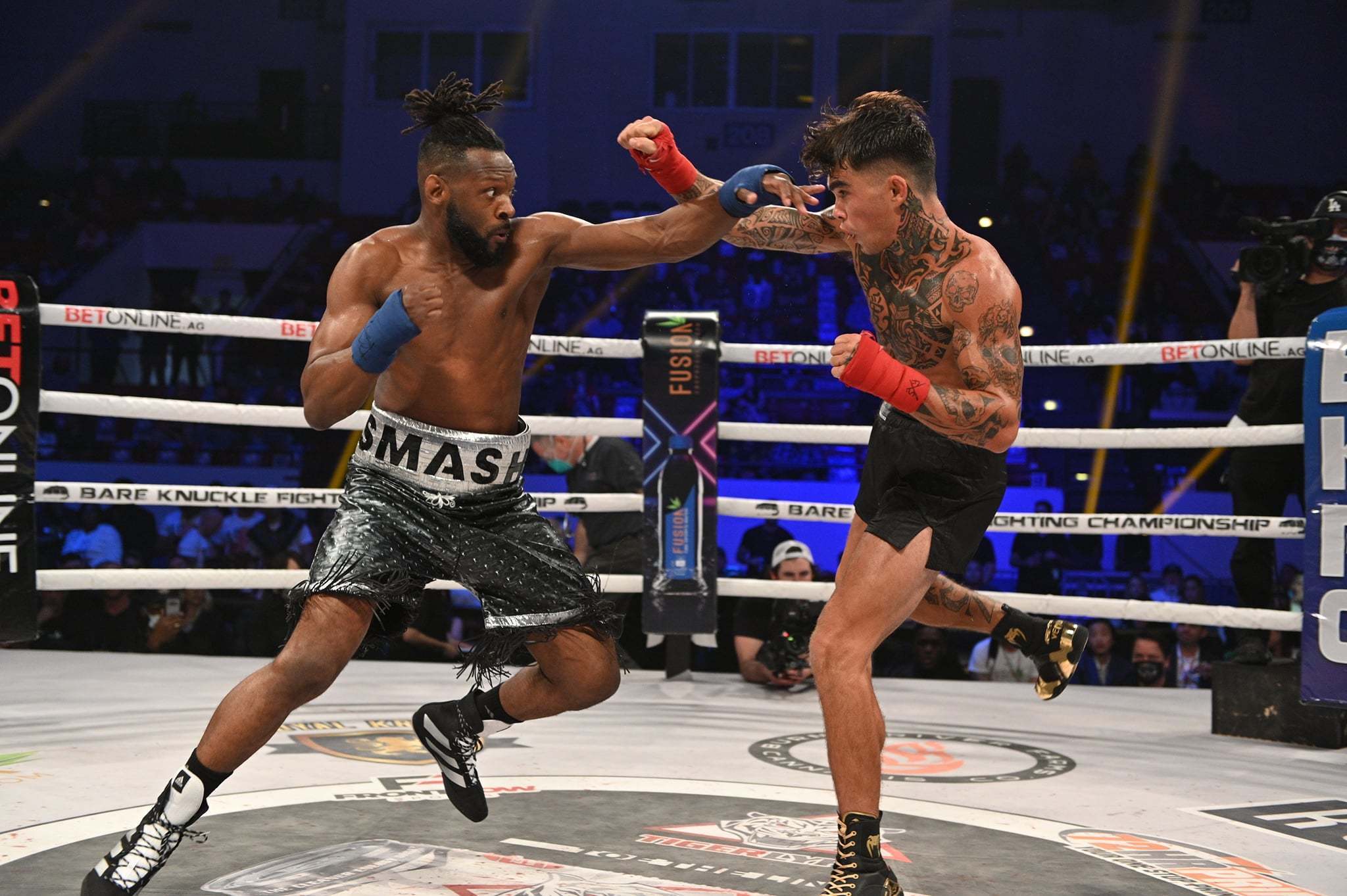 “You have to respect the fact that [Luis Palomino] is a veteran and knows his way around the ring,” Brown insists. “I’m not dismissive of him, but I’ve been training for a long time. I’ve seen people who run, I’ve seen people who come forward. What is he gonna do? Exactly what I’ve trained for?”

Like any fighter, Brown looks toward a championship. For the most part, the title is the zenith. A champion sits atop the throne. But, quite philosophically, Brown says title aspirations may not define him.

“[At the start of 2023] I just plan to have the strap around my waist. But who are you then? What do you become? What do you stand for when you do get that strap? I take it one step at a time and worry about beating [Palomino] up.”

Brown’s accent is easy to listen to. He’s affable and accommodating, polite in conversation. As a nice guy, he’s convincing. But it’s a trap. And if the lightweight champion isn’t careful, Brown is gonna catch himself a title.