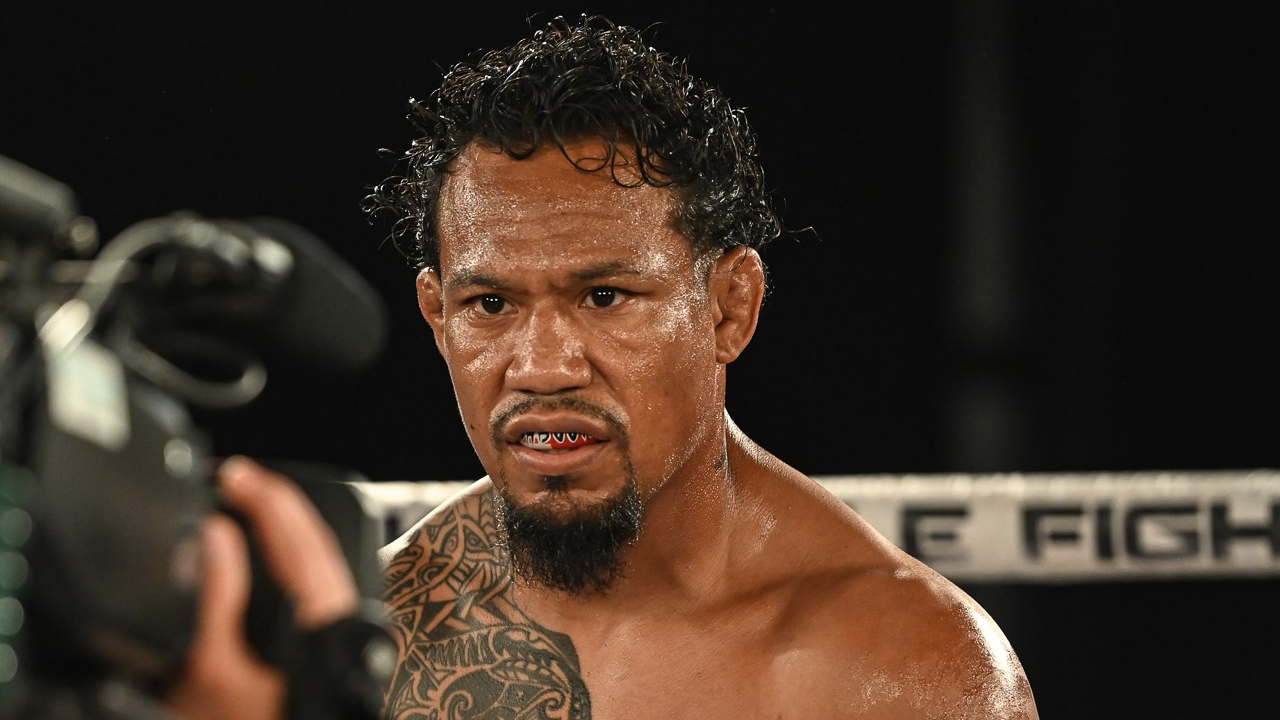 Luis “Baboon” Palomino is widely considered one of the more skilled, technical fighters in bare knuckle. That opinion doesn’t just come from him, but from several world class fighters and trainers, so it holds more weight than the usual pre-fight braggadocio. Listening to all of those people may not be necessary; if you have about 30 minutes, you can watch Palomino’s entire bare knuckle career, thanks to two quick knockout victories.

In his five fights in BKFC, the lightweight champion has shown he can aggressively pounce on opponents quickly, or take his time and win on points, using angles and better technique. Palomino even toughed out a title defense while significantly diminished, feeling the aftereffects of a serious COVID-19 infection. He’s healthy now, he says, and as versatile as ever.

Going into the next defense of his title at Knucklemania 2, Palomino says that challenger Martin “Smash” Brown is irrelevant. The champion would approach this fight roughly the same way no matter who opposed him: gunning for a knockout. 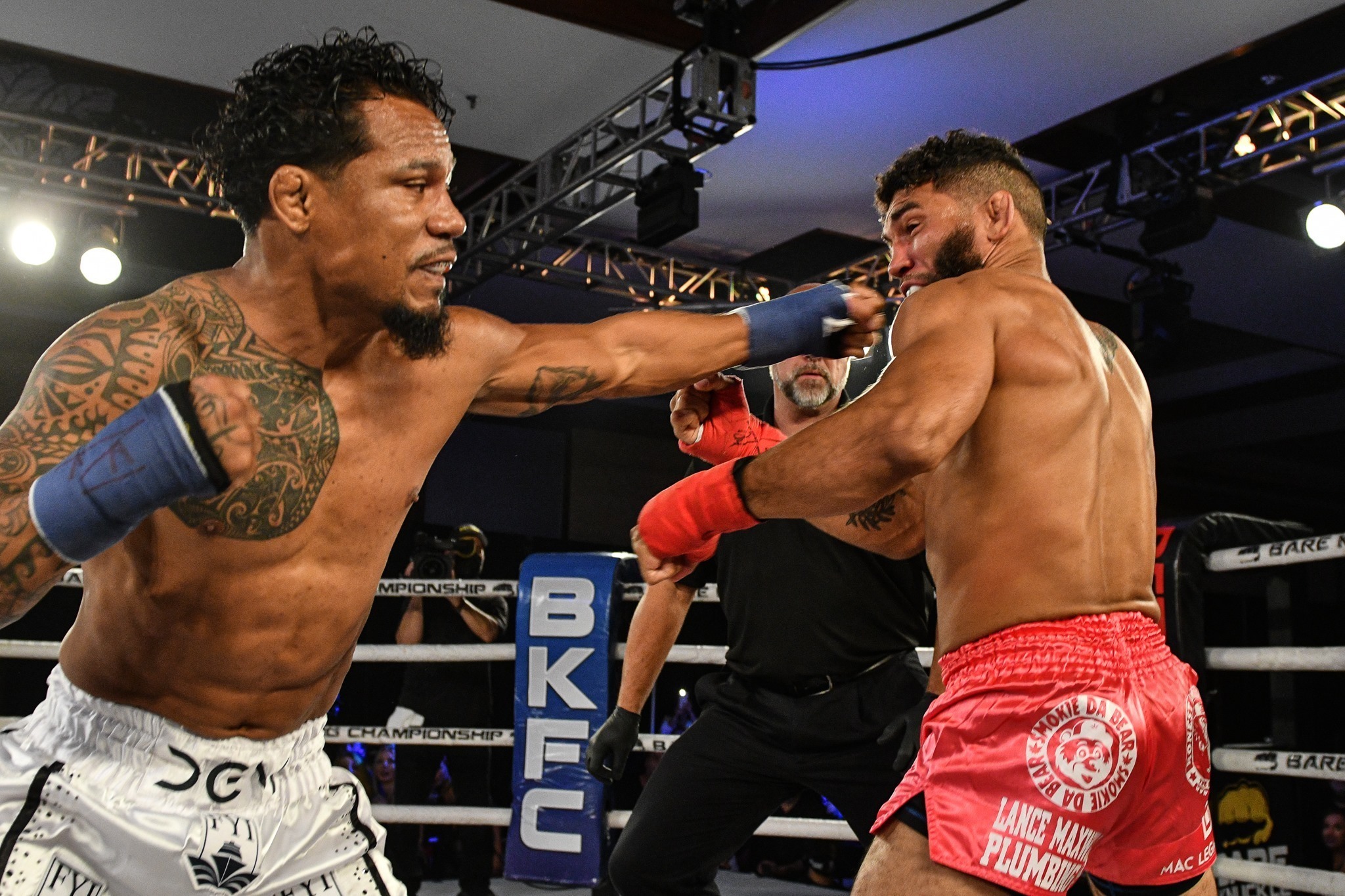 “My full energy and power is at 100% capacity,” Palomino said emphatically. “I’m back. And I’m hungry to knock somebody’s head off. I don’t care about Martin Brown, I’m older than [getting personal] and I’m smarter than that. I just wanna knock somebody the f*ck out. And he just happens to be next. I’m going for the kill. He’s gonna go to sleep.”

The stereotype of a menacing fighter and the idea that anger is always the primary motivator for a warrior are both somewhat negated when speaking with Palomino. He seems very calm and generally at peace—apart from the desire to decapitate, of course.

Whereas some fighters simply do, and don’t know why or how, or even have the curiosity to want to know those things, Palomino can analytically break techniques down and make them pleasant to the ear. He’s good at relating what it might be like to be a fighter. If asking about upcoming opponents could be construed as bait, he won’t take it. 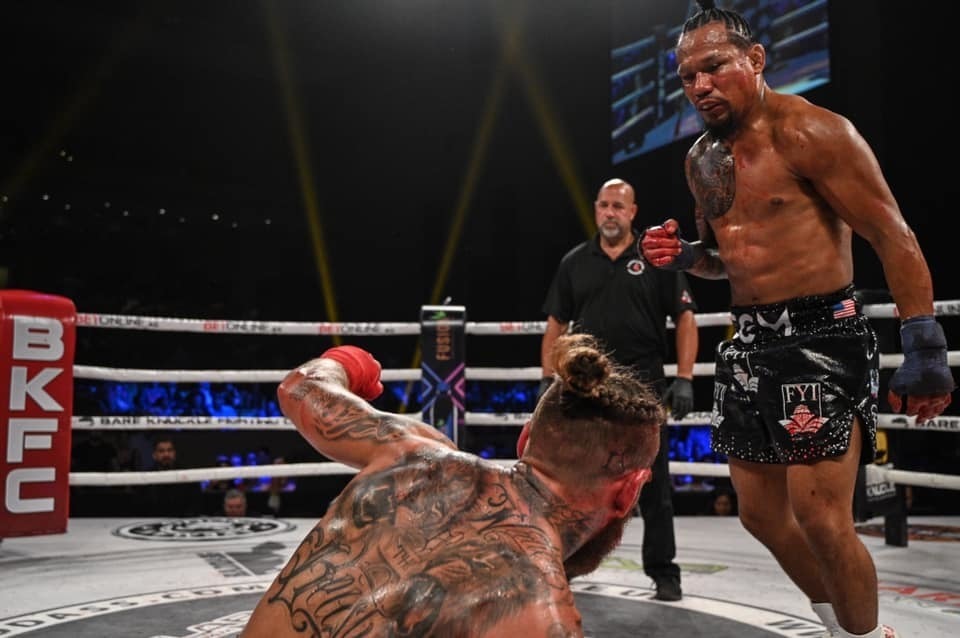 “My feelings [toward Martin Brown] are zero,” Palomino says coolly. “Everyone believes that they have to try and emulate Conor McGregor and really sell fights. [Brown] is showing this persona that’s not him. All of the sudden he’s this tough guy and calling me an easy fight. I mean, does he really believe that? I have no feelings toward him. He’s another person in the way.”

When Palomino was ill, however, he was sick enough that his career could have truly ended. Completing normal, everyday tasks was difficult going into his last defense, against Dat Nguyen at BKFC 22.

“I couldn’t even walk places without an oxygen tank,” said Palomino. “You think you’re normal for one moment, like I’m there feeding the dogs, and next thing I know I’m out of breath.” 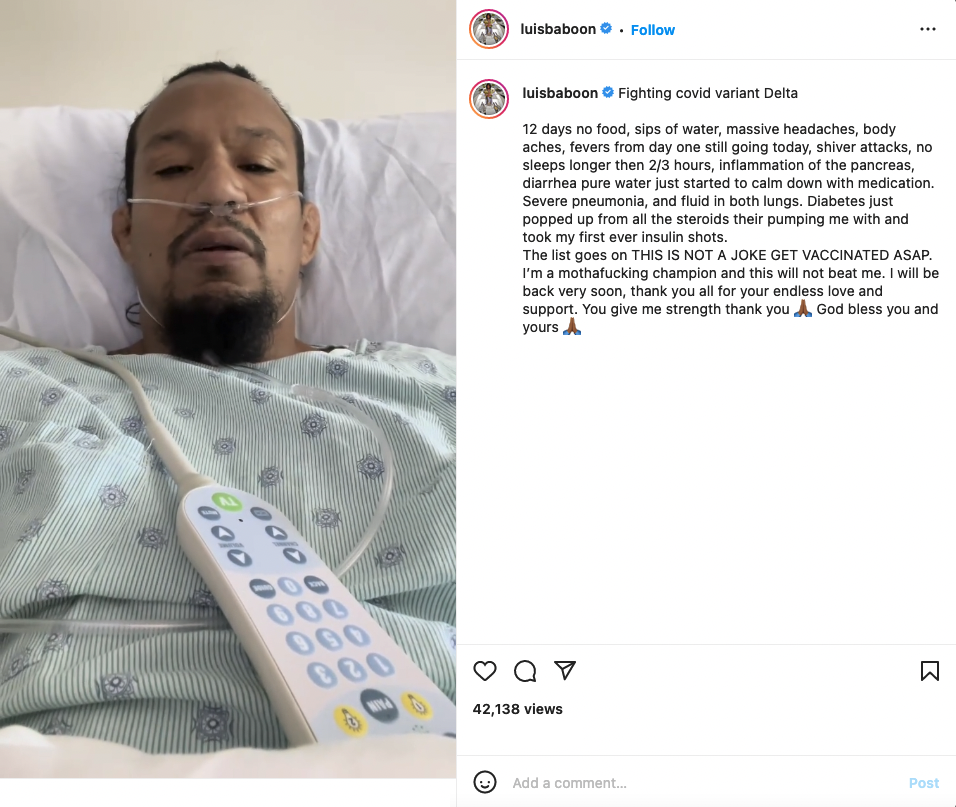 The inability to train for the Nguyen fight as he usually would, and his subsequent lukewarm performance, is about the only thing that gets Palomino’s dander up, just barely.

“Three months prior to the [Dat Nguyen] fight, I’m coming off a hospital bed,” Palomino says, when asked about circumstances surrounding the fight. “My medical records said I was pre-anemic, pre-diabetic and had no cortisol. It was really bad. People don’t understand that, but I don’t really care. I know what I did. I took a fight from the hospital bed, got ready for the fight with no power or strength, lost muscle mass and still did really well. I was untouched.”

In most combat sports, the damage to a fighter’s face isn’t always indicative of how well they performed. Bare knuckle is different. It’s a sport “built for me,” Palomino insists. Knuckles tear flesh, mark up skin. Under those conditions, getting through five two-minute rounds with a clean face afterward is quite impressive. 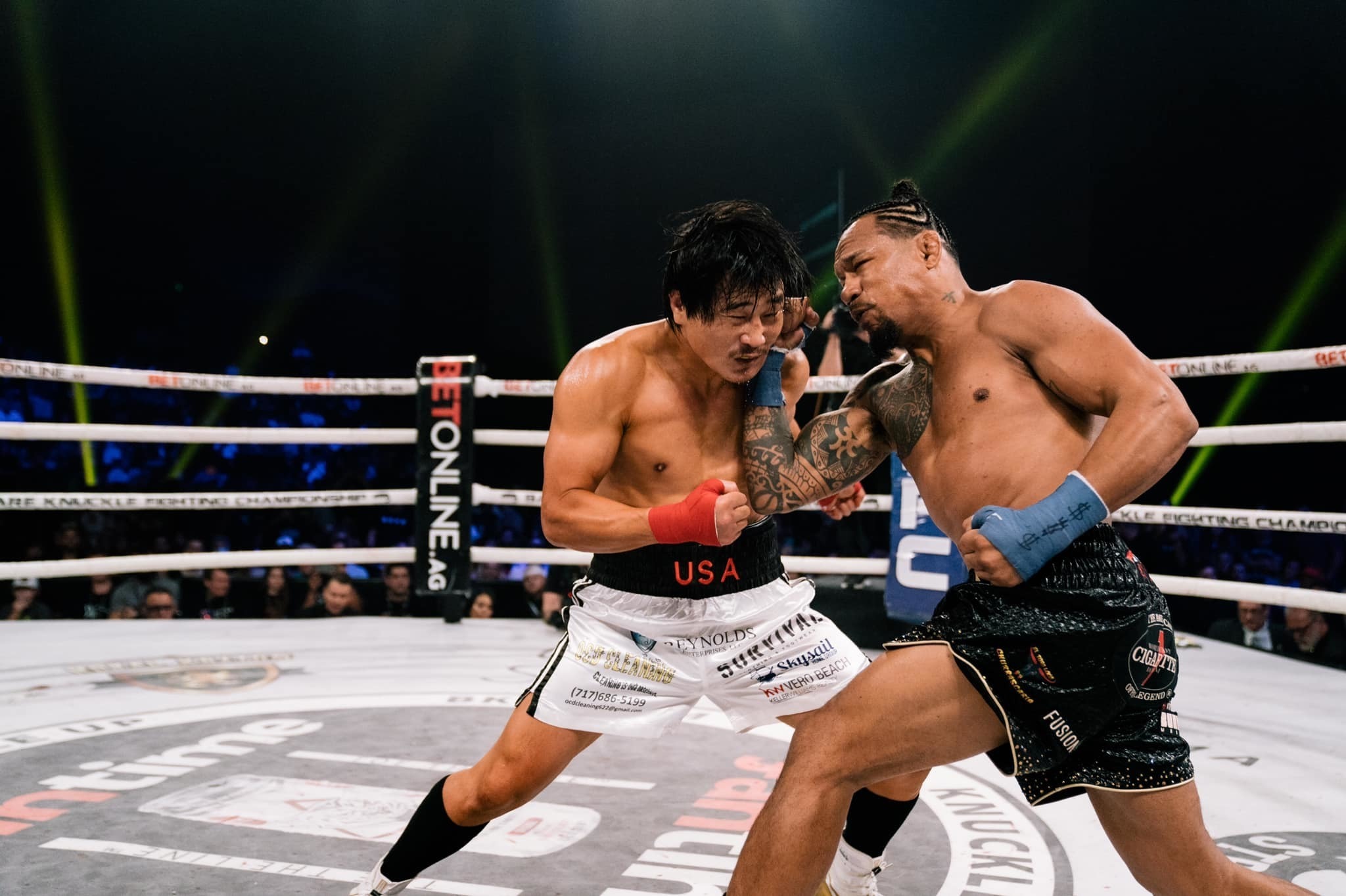 Besides, Palomino says, there will always be detractors. Especially in a new sport surrounded by doubters being proven wrong time and again.

“Some of those people [criticizing bare knuckle fighters] have probably never fought a day in their lives. It’s their opinion, you respect peoples’ opinions. At the end of the day, this is a sport so there’s gonna be good talk and bad talk, but as long as they’re talking [it’s fine]!”

One of the few places where they aren’t talking about Palomino enough is Peru, his home country. Just a few months ago, Palomino visited Peru for the first time in more than three decades and was disappointed to learn that nobody knew about the Peruvian lightweight champion in BKFC. But that will change, he demands. The crew of a popular Peruvian television show recently cover Palomino’s training, for starters, and the champion says he can bring BKFC to South America. 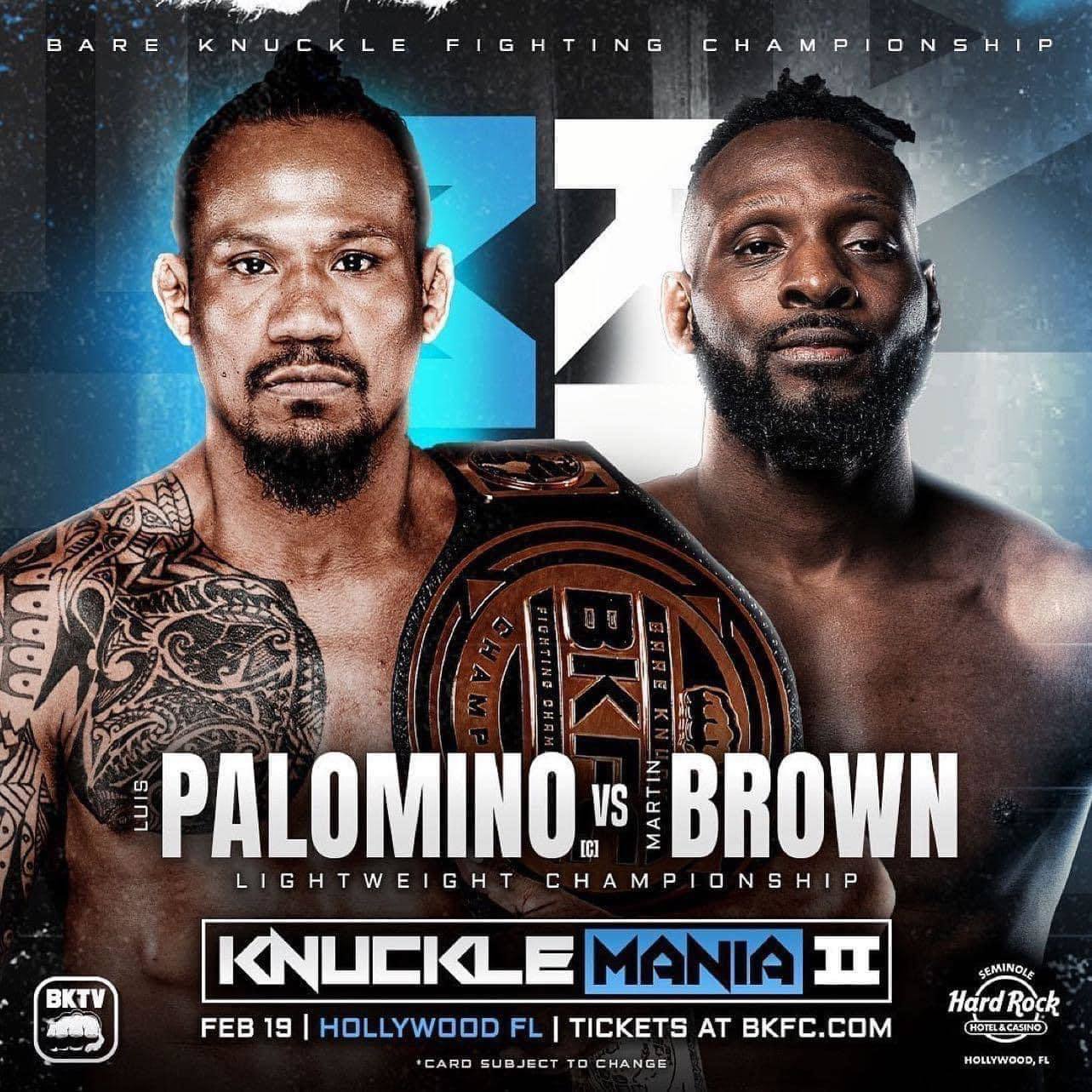 “I’m the only Peruvian in the world with titles in four different [mixed martial arts] organizations, two different weight classes. And I’m the only bare knuckle world champion out of Peru. I would love to take BKFC to Peru. I know I can fill a stadium over there.”

First up, though, is Martin Brown, who is no pushover at 3-0. Just don’t remind Palomino. The champion has bigger plans: becoming the first ever two-division bare knuckle champion.

“After this fight, I want the 165-pound strap. I don’t care if I have to go to Puerto Rico to take it [from welterweight champion Elvin Brito]. If he don’t want that, we can take it to Peru.”

His plans are ambitious. There aren’t many bare knuckle fighters with the know-how to pull it off. If Palomino can make to 6-0, take his plans seriously.