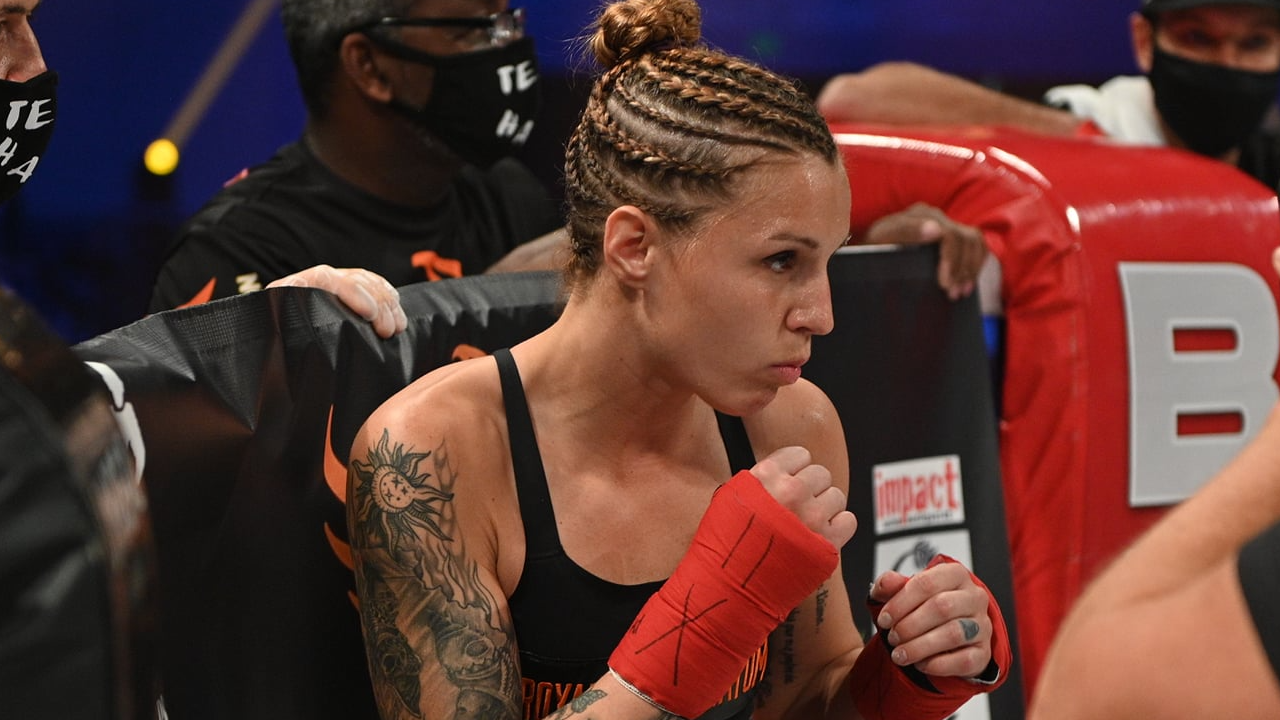 In the epic poem "Paradise Lost," John Milton wrote, “Long is the way. And hard, that out of Hell leads up to light.” For Britain Hart, aka Britain Beltran (she married former BKFC heavyweight champ Joey Beltran last July), every portion of that is true: the road has been long and grueling hell, and it ultimately leads to light. And it’s more than combat sports, than fighting and bleeding and taking hits in bare knuckle. This is about life.

Living life as if it were a prize fight to brawl through, or something to be overcome by absorbing its smashes and returning fire harder, stronger and better, is what Hart believes will lead her to a win when she rematches Christine Ferea for the inaugural BKFC women’s flyweight championship at Knucklemania 2. 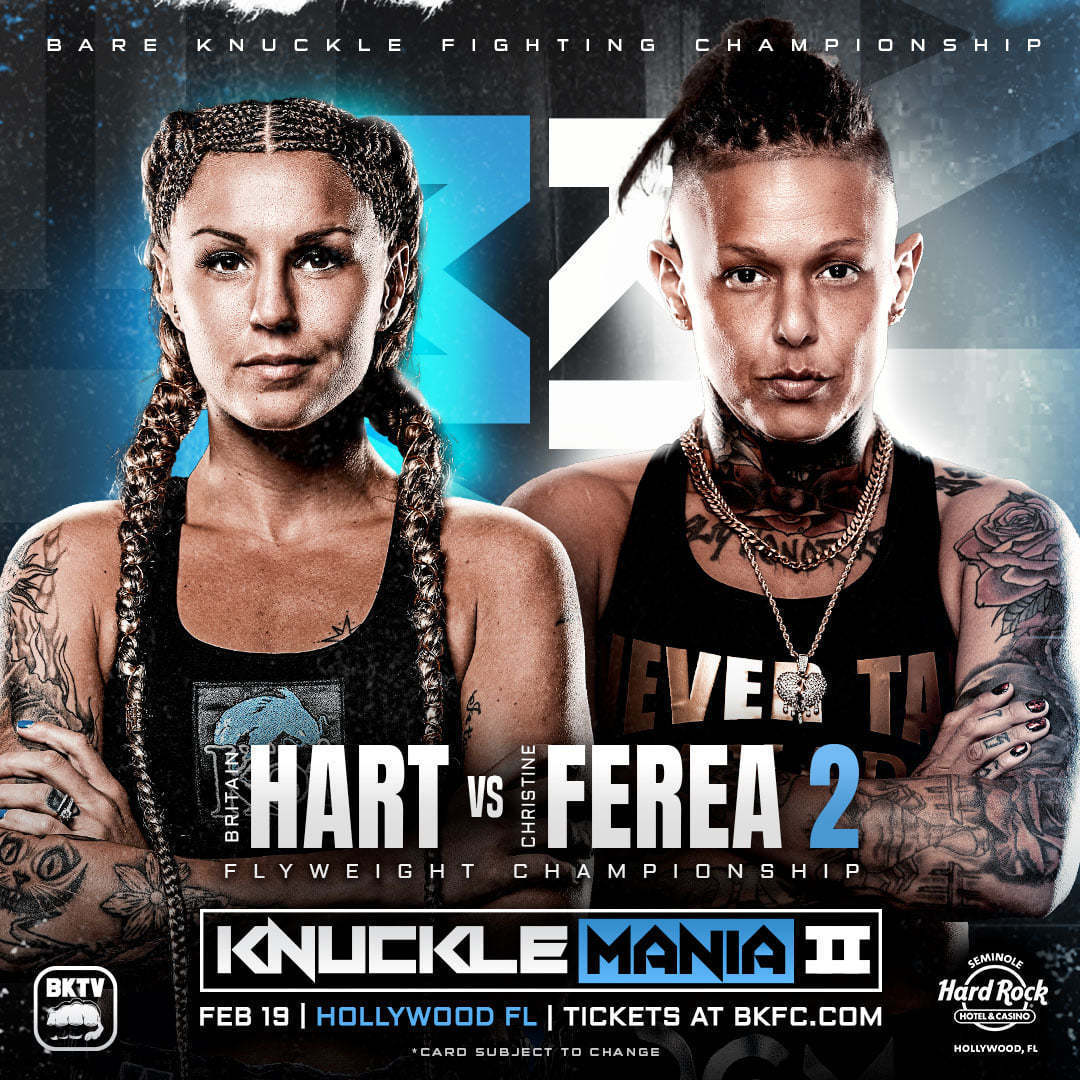 It’s certainly a more emotional approach, and Hart is never short on feelings. Her intensity is more of a boon than most people think, she says. And Hart directly responded to Ferea’s claim that “this is business,” when discussing combat sports and their previous friendship.

“That’s where people are getting it twisted,” Hart intimated. “In the fight game, if you wanna be good, or if you wanna be great, it’s personal! Because it’s your life [on the line]! If you don’t take it personally, I feel like you lack the fire and passion.”

Much of what Hart says is an extension of social media sniping between her and Ferea, even if it also broadly applies to life and a fighting career. Where Hart feels she truly stands apart from Ferea or other fighters in BKFC is what she’s endured in life to arrive at this opportunity, another step toward the light. There are stories she’s quick to tell, and those she’d rather not.

“Years ago I got a Planet Fitness membership,” Hart said. “Not because I needed a gym, but because it was open 24 hours and I was sleeping out of my car at the time, and there were showers there. It was a way to go take showers without people noticing that I lived out of my car. I remember seeing pizza night and bagel days, these free meal incentives for their members, and I would put that in [the schedule in] my phone. I would put an alarm so I knew I had a meal that day. I worked as a server and a bartender for so long because that was my shortcut to getting free food or having reduced food costs. Those were moments at my lowest.” 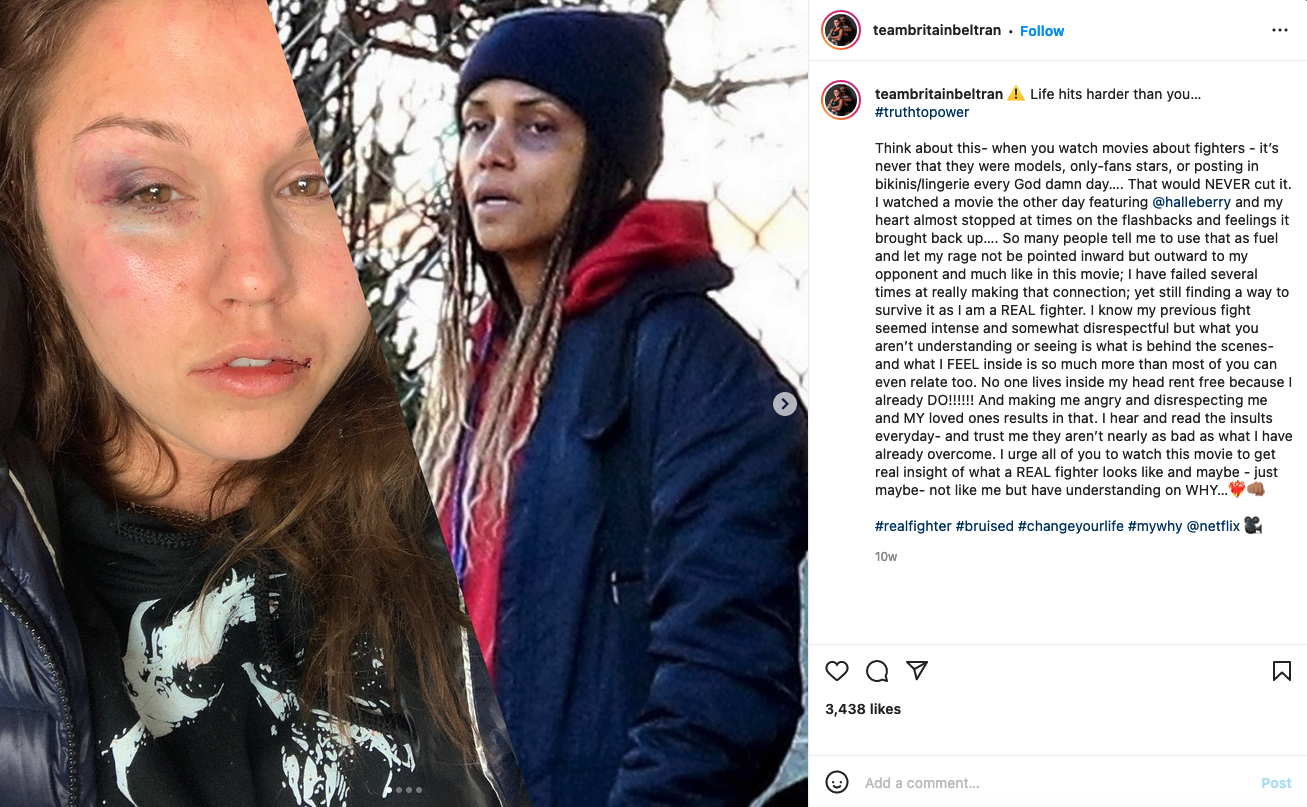 Years of uphill battles are finally paying off in multiple ways, though nothing has come easy. The first fight against Ferea at BKFC 5 was stopped just as action heated up. Her subsequent win over Randine Eckholm was late notice. She was underestimated against Paige VanZant, Jenny Savage and Pearl Gonzalez. Still now, after a four-fight win streak and refusing to succumb to long odds, Hart is again overlooked on her quest for revenge.

Hart isn’t after your garden variety fight vengeance, however. Predictably, it’s more personal than that.

“This [rematch against Christine Ferea] isn’t so much revenge or rematch from the fight in 2019,” Hart said matter of factly. “I let that sh*t go. It was a doctor’s stoppage, [Ferea] didn’t whoop my *ss, didn’t knock me down, she didn’t do sh*t, in my opinion. It’s the revenge on the friendship we had when she said Paige was gonna smash me.” 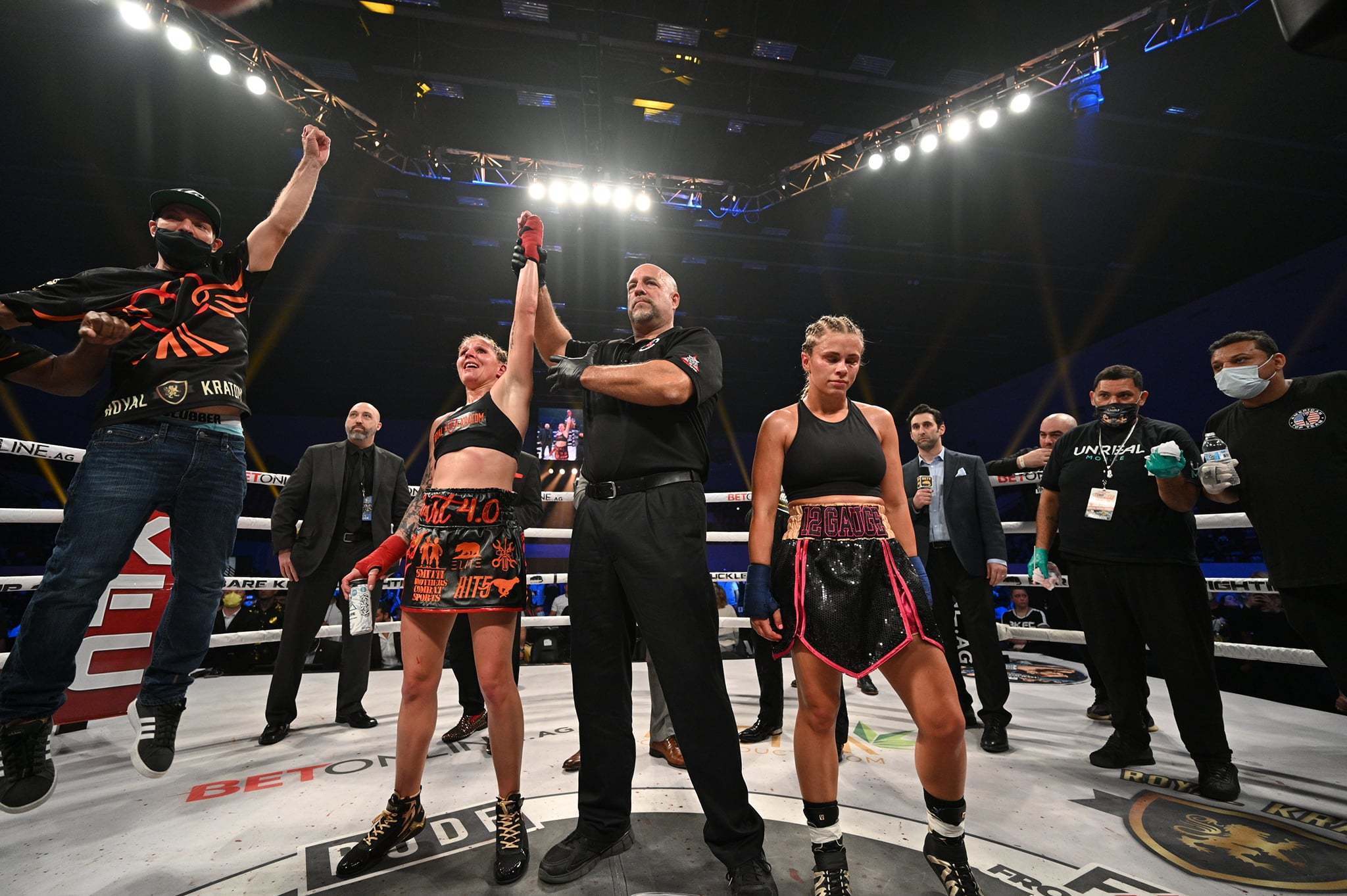 The “taking things personally” portion is where Hart and Ferea’s stories about one another split. Until that point, Hart says the same thing Ferea does: after their first fight, the two hung out and were friends for a spell, even training together. When Hart was offered to fight former UFC star Paige VanZant in the latter’s BKFC debut, Ferea openly angled to face the winner, who, for financial reasons, she hoped would be VanZant. And Hart felt that was a betrayal.

“Christine just makes me feel super angry, like ‘everything that’s wrong with the world’ angry,” Hart says, ready to seize on whatever Ferea says and argue, it seems.

The other day, for instance, Hart says Ferea dismissed the idea of Hart having any fun in training camp as Ferea grinds away. Hart claims Ferea complained of boredom while in camp, implying Hart would be an easy fight, eagerly pointing out what she feels is hypocrisy. Then there was Ferea’s instagram post saying she would “DERAIL THE BARBIE HYPE TRAIN.” 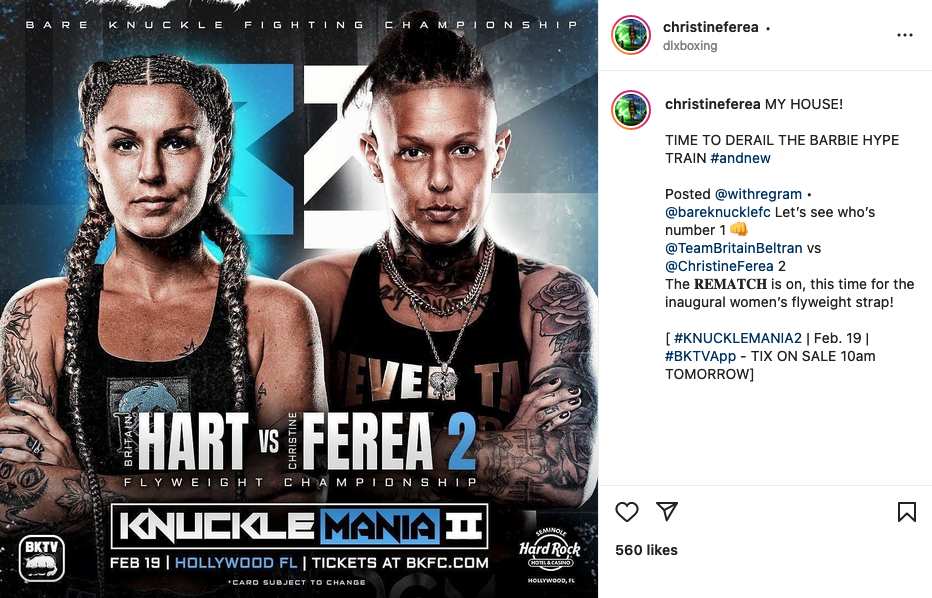 “[Ferea] said she’s gonna derail the Barbie hype train,” Hart complained. “But I’m the opposite of that. I’m 100% real. Get the f*ck out of here. I went from 0-2 and clawed my way up. She said I have no idea what it’s like to be self made, but what is she talking about? I’m one of the most self-made motherf*ckers out there!”

Regardless of Hart’s relatability due to her struggles, it’s difficult to argue that her current fighting streak isn’t impressive. Hype often takes priority over real quality, thus dismissing Hart’s four-fight comeback from an 0-2 start in bare knuckle is par for the course. She’s used to it, and she’s visibly improved anyway.

That defiance is largely because Hart knows hell. She lived through it and left it behind her. And now, she promises to bring it to Ferea.

“You’re gonna see even more growth from me in this fight,” Hart insists. “The time of the feel-out round is over. Each round counts. I’m going in there with every determination to let it all out. And if I do, I’m knocking [Christine] out in the first round.”